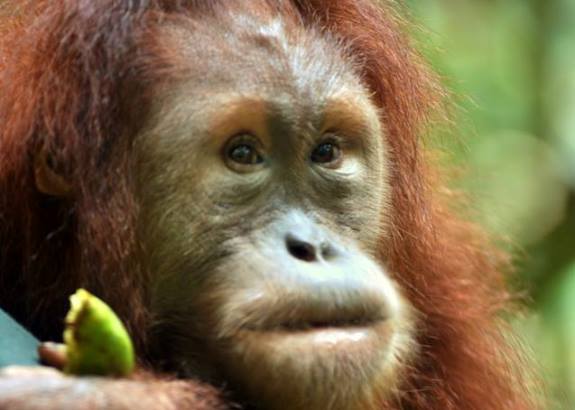 On the 4th of December 2012 The College officially adopted Monti, an orangutan currently residing at the Orangutan Emergency Centre, Ketapang, West Kalimantan in Indonesia run by The Orangutan Project (TOP).

TOP was set up in 1997 and works closely with care centres to provide them with the best technical assistance possible, ensuring orangutans are supported and able to be reintroduced into a secure habitat.

For more information about The Orangutan Project and the extraordinary work they do visit their website.

Monti is growing bigger and bigger and now spends all her time out on the islands, foraging during the day and making a nest to sleep in at night. Orangutans on the islands do not come back to the cages at night, and here Monti is thriving. She now has a boyfriend, called Pungki, and he and Monti spend a lot of time together.

Spending so much time with Pungki, a great nest builder, has improved Monti’s nest building skills considerably, and although always good at this, she has shown great improvement in the last six months. She is a good forager, able to find fresh fruit and often catches insects to eat, so we hope these combined skills will put Monti in good stead when she is, we hope, eventually released back in to the wild.

Monti is a very active and popular orangutan, and will play with anyone, though she is still very forceful about which keepers she will allow near her. One aspect of her personality that is becoming more obvious is how assiduously clean Monti is, and how important this is to her, to the point that if she gets any dirt on her fur, she will moan and spend a lot of time trying to clean herself. Keeping clean is obviously a challenge in the tropical rainforest, so this is something Monti might have to get over as she continues her journey to the wild!

Monti has continued to develop her forest skills over the last six months. She is one of the top performers in forest school. She is a very clever orangutan and is brilliant at making nests, foraging for her own food and behaving like an orangutan. She is quite independent and confident.

Sometimes, Monti chooses to make her own nest in the canopy in the forest and sleep there rather than return to the night enclosures. All these skills make Monti an ideal candidate for release in the future.

Monti is one of forest school’s high achievers. She is doing very well, spending lots of time climbing high in the trees. She will often build and use her own nests to rest in. Monti is growing steadily and weighs over 17kg.

She can be quite independent and will disappear from the group to spend time on her own doing what an orangutan should do including foraging for her own food and building nests. She also mixes well with all the other orangutans in the group, especially Bandut who she loves to wrestle with.

Monti can often be seen hanging upside down from a branch, bouncing up and down. Her favourite enrichment is a burlap sack, filled with sawdust, fruit, seeds and nuts.  She will keep a sack to herself and slowly forage through it to get all of the treats out. Once it’s empty she will have fun climbing in the sack and rolling around, or covering herself in it and sneaking up on the keepers to give them a bite.

Monti was doing well in the temporary transit center, but she is thriving in Sungai Awan. She was one of a handful of medium-sized babies who moved to the new center at the end of January.

Monti has adjusted well to the change and remains independent. She still has a calm demeanour while with the others in the sleeping cage, but when going out into the forest, she likes to push the boundaries a little. When some of her friends choose to walk, she takes to the trees and makes her way to the feeding platform in the forest at her own pace. We are confident that she will continue to practice the skills needed to survive as a wild orangutan in the future.

Monti - December 2012 The Start of a Beautiful Relationship

Monti´s life has gone through a few changes in the last months, but there is one that has particularly affected her: some of the biggest babies have been moved from the Baby School to the Transit Centre. Ongky and Puyol were the first, and then was the turn of Sigit and Uyang. They were the biggest males in the Baby School and also the dominants.

Jack and Bandut, two big male babies also, are still in the Baby School, but, even though, Monti has become in a kind of dominant leader. It is unbelievable the transformation her character has gone through. She has always been pretty wild and independent, but now, when you are close to her, you can really feel that she is the dominant there. Babies are used to be with the baby sitters that take care of them.

The medical team tent to interact as less as possible with them to avoid disrupting them. But sometimes you have to be among them to give a medication or perform a check. Now you have to mind your back because Monti could be there swinging on a rope or a hammock ready to grab your hair or slam you! Always is a display of personality more than an aggression, like saying “get out of my territory”. And the best thing of these evolution is that Monti has become wilder, which is what we are always looking for in a rehabilitation process.

The wildest an orangutan it is, the highest the chances of doing well when back in the forest. Becoming a tough girl seems to have a positive effect on her health: she has not suffered even a cold in the last months. Must be the strong nature of the leader! She is now 11 kg and continues to be as playful as ever, expending long time up of the platforms and the trees and playing with the others. In the coming months, may be as soon as by the end of the summer, the new center IAR is building in Ketapang will be ready to receive the babies. This will be another massive change in Monti´s life, and it is going to be a very positive one.

The new center will provide the facilities to encourage the baby orangutans to reproduce the behavior they show in the wild. This is key in the long way that has necessarily to end in the forest, the place where Monti and all the others belong to. Surely with all the efforts of so many people Monti will be in not too long back to the place she never should have left.